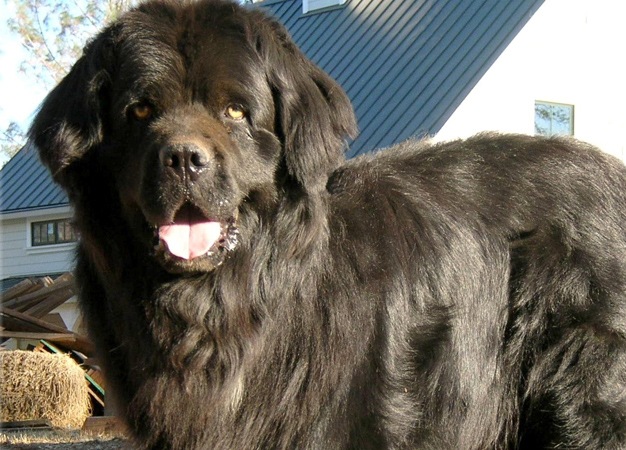 And just what does “dry mouth” mean?  Well, not that the mouth is entirely dry.  But, it does mean that it is not leaking the strings of drool that characterize most Newfs.  A dog that is of a non-drooling breed might salivate during a car ride, a stressful situation, or while watching you eat a juicy hamburger in front of them.  My own Newfs have not drooled even in these situations but, I would forgive them and not brand them “droolers” if they did.

Most Newfs, like St. Bernards and some other breeds, drool.  One reason is because the flews of their lower lips are loose and hang out and down.  Some more than others.  You’ve probably seen the look.  The saliva just runs out.  Also some newfs produce more saliva than others – just like people.  The extra active saliva glands are hereditary and contribute to the drool problem.  The lines from whence our stock derive are a little dryer and just a little tighter in the lower lip.  As you can see from the pictures, it does not alter the shape of the muzzle.  But, the saliva stays in.

Now, if you read on-line comments on this topic you’ll see a lot of “there’s-no-such-thing-as-a-dry- mouth-Newf.”  This is propagated by lovers and breeders of droolers.  I can appreciate their view.  Because of the endearing qualities of the breed, these folks have loved and cherished their Newfs in spite of the inconvenience of constant hanging ropes of saliva.  They towel and bib them with unflagging devotion.  Newfs have been drooling for so long  that when we think “Newfs” we naturally think drool.  It really speaks to the exceptional nature of the breed that they have been carefully bred, groomed, trained and loved for years and years of drippy mouths.  Initially these Newf-loving folks explained to me that all Newfs really do drool, though some not very much, and so any breeder that claims otherwise is not telling the truth.  However, as more eye-witnesses discover that there actually are some excellent lines of Newfs out there that don’t drool, this argument is becoming indefensible. I am hearing a new thought emerging now.

It goes something like this:   “Okay, maybe some of them don’t drool, but those aren’t really Newfoundlands, because Newfoundlands are dogs that drool.”  This is almost a direct quote from an officer in a Newfoundland club that spoke with me.  It is thought that a dog can’t be bred to the breed standards if the breed standards have mostly produced droolers.  I think the important part of  that last line is the “MOSTLY.”  It seems to be okay for a Newfoundland to not drool (some very fine specimens out there don’t) as long as it is an accident and not intentional.

In fact, an interesting statement is made by Emmy Bruno in her classic book, “The Newfoundland.”  (A must read for breeders and judges).  Emmy Bruno is an internationally recognized expert breeder, exhibitor and judge of Newfoundlands.  Here are her words on Newf mouths and drool:

“The outline of the mouth is soft, but must not form an evident commissure or closure or form hanging pockets…  An overabundant lip accompanied by lower lip pouches has no functional meaning except to flood everything with saliva every time the dog shakes his head.  It must be remembered that the Newfoundland is not a dog that drools if the lips are correct.”  Page 66 -emphasis mine.

I know that the AKC and most good breeders have the excellent goal of breeding toward the standards and to improve the Newfoundland.  We should all be very appreciative of this.  The ideals of the breed standards make a Newf, a Newf.  We should also be moving toward fewer dysplastic dogs, fewer incidents of heart problems and cystinuria.  But, not every one is ready to think of a drool-less mouth as an improvement.  Yet, most will admit that occasionally there are dry mouth Newfs out there.  I’ve spoken to a number of owners that had registered Newfs that didn’t drool and some didn’t even know it was a breed-typical trait.   I am not a canine geneticist, but am told that if you breed excellent specimen dry mouths to unrelated, excellent specimen dry mouths, over a period of 30 years, you can make this improvement without compromising health or conformation.  It requires a very selective, careful, breeding program.  Our stock is the result of such a 30-year program.

A slobber-free Newf is a clean Newf.  Your dog, clothes and furniture will all smell better as a  benefit of the dry mouth.  The Newfoundland disposition lends itself to usefulness in the area of therapy dogs, and service dogs.  In some current programs, autistic children, troubled teens, children and adults with cancer, elderly, terminally ill, physically disabled, and emotionally impaired folks have all benefited (some in remarkable ways) from the easy-going, unruffled, ways of the gentle Newfoundland.  However, medical staff, for example, are not comfortable with a lot of dog saliva in the sanitary environs of, say, a hospital .  A dry mouth would allow these special Newfoundlands a larger sphere in which to work their magic.  I believe it is a positive trait to breed toward.

Perhaps I have a weaker constitution than some, and that’s why for me, a dry mouth is a plus.  I can say, “Come on Niles, put your huge head in my lap.”  I can hug and snuggle with my sweet Euphrates all the time without cringing.  I don’t wonder what’s growing on an un-wiped ceiling.  I think a dry mouth is a nice thing.  And maybe, some others do too.